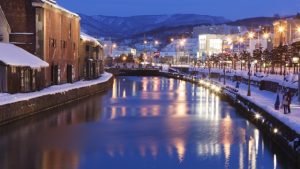 OTARU
New Year’s holidays in Japan can become truly fabulous if you decide to visit the picturesque port city of Otaru. During the economic boom of Hokkaido, at the end of the 19th and the beginning of the 20th centuries, Otaru flourished, and many western-style buildings were built in the center of the port city. Many of them were later converted into restaurants, cafes, boutiques and museums. These establishments located on Sakaymatsi Street are very popular among tourists.

The program of most travelers necessarily includes a visit to the Otaru Canal, renovated in the 1980s, the annual Snow Light Path Festival, as well as the Museum of Music Boxes, where more than 25 thousand old and modern music boxes are collected.

When the catch of herring decreased in the 1950s, local glass manufacturers began to produce high-quality glassware, and today tourists who are interested in and fascinated by this craft can try their hand in the production of glassware Otaru.

And if you like to taste alcoholic beverages, we recommend visiting the Tanaka Sake distillery to not only see how to make high-quality sake, but also to taste the best samples of 10 brands of this alcoholic beverage. Here you can also try sake cake made from the remnants of rice after fermentation or local vegetables marinated in sake.

SOUNKYO
The small town of Sounkyo is famous for its hot springs on Mount Kurodake. Located in a narrow gorge at an altitude of 100 meters, covered with forests, this region is also known as one of the coldest regions of Japan – therefore, it is necessary to dress very warmly here. And if you purchased the New Year tour to Japan for more than a week, we advise you to visit the Sounkyo Ice Festival (mid-January – end of March). Here you can admire the incredible landscape of tunnels, caves and stairs, completely made of ice and illuminated by colorful lights.

The festival takes place along the Ishikari River. The festival program can change from year to year, but usually it is represented by large ice sculptures and snow buildings, and also ride on tubes. There is also a snow-built stage where various shows and events are held.

If weather conditions permit, you can see the gorge, which gave the name to the city and stretched for 24 kilometers along the Ishikari River.

In your free time you can also wander along the coastal paths and admire the frozen waterfalls. If the weather is clear, you can take the cable car to the top of Kurodake Mountain. The city also has indoor hot springs where you can spend time after long walks.

LAKE AKAN
On the way to Lake Akan, tourists usually stop at the Akan International Crane Research Center, which is also a museum, breeding center and reserve dedicated to rare Japanese cranes. Next to it is the Tantso Observation Center, which provides food for birds in the winter months when snow covers the ground.

Hunting in the 19th century and a reduction in habitat in the 20th century led to the fact that by 1924 less than two dozen cranes living in the nearby Kushiro swamps survived. These birds, which are a symbol of happiness and longevity in Japan, desperately needed protection, and gradually their population began to increase, reaching 1,000 individuals by the beginning of the 21st century. Now in Japan there are about 1300 cranes.
From the center, tourists go to a picturesque lake in Akan National Park, where you can stroll along forest trails. Along the shores of Lake Akan lies the small village of Ainu Kotan, where about 200 Ainu, the indigenous inhabitants of these places, live. Tourists are happy to visit the Ainu Museum, which houses musical instruments such as mukkuri (like a lip harp) and tonkori similar to zither, as well as traditional instruments and clothing. And there is always a chance to hear songs and see the dances of Ainu, glorifying nature.

SAPPORO
Sapporo is Hokkaido’s largest city. Every February, it transforms during the Yuki Matsuri Weekly Snow Festival. The festival was launched by high school students who built snow castles here in 1950. Now this ambitious event attracts more than two million visitors from all over the world to vacation in Japan in the winter.

As the festival developed, in addition to creating snow sculptures, other types of entertainment were added: concerts, food stalls, art exhibitions and ice-skating, cheesecake and snowmobile platforms.
If you go to Sapporo for a few days, be sure to take a stroll through the Odori park, which is the main venue of the snow festival, climb to the observation deck on Hitsujigaoka Hill, which offers a magnificent view of the city. There is a statue of William